I saw this article on Facebook and it is one of the best pieces  of social advice I have seen in a while, I throughly recommend it:

How not to say the wrong thing 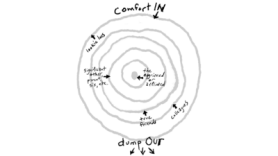 Its old hat I know, but still true, that the church is its people, not the building we meet in.

So how come so much time is spent acting like that isn’t so? We spend lots of time doing and less time being with each other.

I read this article on pastoral care today and it reminded me that no one ever came to Jesus because of a program. Instead it was the personality of Jesus that drew true discipleship.

Paul says that God is using us as ambassadors,  as though God were making his appeal through us (2Corinthians 5:20). Note, us, not our buildings or our doughnuts or our super-duper worship/speaking/toddler group.

Paul goes further. He said he became nothing so that people wouldn’t get tangled up in the programme and miss the personality of Jesus (1 Corinthians 2:1-5).

And yet all around me I see the church both traditional and modern getting tangled up in… Stuff.

You know, we could meet in a porta-cabin with a battered old CD player and a packet of rich tea biscuits, as long as we had love. That is, after all how Jesus said people would know we were his disciples  (John 13:34-35).

I find the lack of love I sometimes see particularly painful when it comes to young people. We are called by Jesus to love our neighbour as ourselves, and yet again and again I see adults putting what they want at gatherings of Christians before what young people might want or need.

So my prayer for myself and others is that we might truly see and hear the people around us and love them more than our (church) stuff.