According to the channel 4 Instagram page, channel 4 “champions unheard voices” and “stands up for diversity”

Apparently that is, unless you are a vegan: 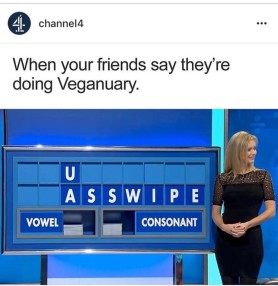 As such I, along with many others have complained to channel 4, because let’s face it, unless they unequivocally and publicly apologise, they are a bunch of complete hypocrites. Below is the complaint I sent via their website. I encourage you to do the same.

Dear Sir/Madam,
I am writing to complain about a post (now removed) on your Instagram page. Apparently channel four thinks its okay to call vegans asswipes. I appreciate that in the public realm, it is perfectly acceptable to make jokes about other people and as vegan my friends do make jokes. However being called an asswipe is not funny. What it is, is school bully tactics to deride someone different to you. I am genuinely insulted and it being on Instagram, it doesn’t lessen the rudeness. I can’t imagine you would allow a news caster on channel four news to say such a thing. And to make matters worse, it appears nobody can be bothered to apologise. Would channel four be happy to call women asswipes? What about a particular religious group? Or perhaps a particular age or class demographic? If not, can I ask why as a vegan, who has chosen a particular lifestyle based on care for the environment and respect towards animals, I am a legitimate target?
I would not only appreciate a reply to my complaint, I would also like to see a genuine apology from channel four via your Instagram account.
Might I also suggest some education around kindness and respect for the employee who thought it was okay to post such an offensive picture and message.
Yours faithfully,
Karen Turnbull