I see Google is celebrating the British cuppa today. Which is a good thing I think. In spite of Britain supposedly falling out of love with tea in favour of coffee, anecdotally, I know loads of people who drink both.

At the end of the day however, there are less tea drinkers in Britain, and why? Bcause we just cant be bothered. The Independent says:

Tea’s fading popularity is attributed to faster-paced living, a generation gap and a stodgy image. Many people these days do not want to take the time to brew tea, and even fewer will interrupt their busy days for the leisurely, civilized ritual of afternoon tea, a 19th-century invention of Anna, seventh Duchess of Bedford, who decided that tea and cakes were the best antidote to a late afternoon ”sinking feeling.”

But wait, isn’t that the point of a cup of tea? A time in the day where we can stop, and savour the moment rather than rush on by? Perhaps in our modern world we need a touch of old fashioned.

Maybe the humble British brew could in fact help us all not rush headlong into busy oblivion….

And then again perhaps it is just, a nice brew.

During lent I pledged not to buy new clothes for a year, but instead to only repair and buy second hand as a way to love a little more gently on the planet.
Which I will continue to do except… who wants second hand pants?

This is where the Mighty Good come to the rescue.

I’m really hoping their crowdfund is successful, because I think I could get lovely new pants without welching on my commitment. This is because they use organic fair trade cotton. On top of that, doesn’t all this sound good:

*Styles, fits and shapes sure-fire tested and scrutinised by our friends and peers to ensure the perfect fit

*Brushed elastic on the waistband for extra comfort and style.

*We use eco-friendly and colourfast dyes that are suitable for washing in cold water.

*Styles to suit all shapes and sizes from size 6 to sizes 20 for women and sizes XS to XL for men.

Yes, I intend to save the planet, one pair of pants at a time 🙂 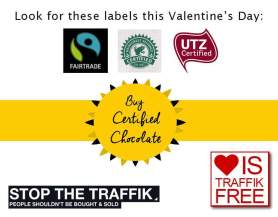 As I write about a just and sustainable economy, one of the enduring problems is our limited definition of wealth. We tend of think of it almost invariably in monetary terms, drawing up ‘Rich Lists*’ and calculating GDP, measuring the success of individuals and the progress of nations through the blunt instrument of financial increase. In reality, money is just one part of what makes life worth living, and that true wealth lies in relationships and belonging, satisfying work and leisure, and a host of other things.

We all know this of course, but somehow it doesn’t seem to filter through. Politicians can stand up and declare that growing the economy is their number one priority, and nobody questions the idea. If they were to say instead that the primary goal of government was going to increasing our collective wellbeing, I imagine they’d be dismissed as ‘wooly thinkers’.

Today’s photo, I’m very grateful for rainforest alliance chocolate, in this case, galaxy. Today’s beauty was found in the morning mist and light in the park, and I learnt how to get from Ipswich to Diss 🙂 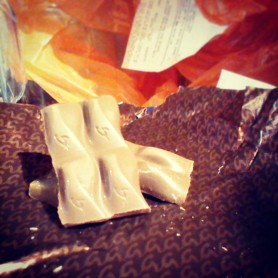 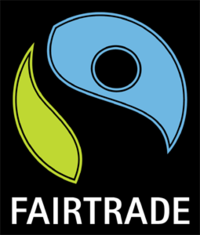 It’s a sticky issue fair trade.  This was made abundantly clear to me when I tried to raise money for the Fairtrade Foundation by asking people to sponsor me for the British 10K in London.

I got three kinds of responses: some sponsored me with no query, others said ” I don’t do fair trade because fair trade instant coffee is horrible” (pardon? did I say I was asking you to buy instant coffee?) but the thing that worried me the most, were those who pointed out to me that fair trade isn’t always very… fair trade.

To be honest, I was a bit put out by this – but I owe those people an apology – and I am sorry, for judging them and being naive myself.

It turns out that sometimes they are right. The Guardian article on tea in Assam, opened my eyes and broke my heart, so I decided to write to as many companies as I could think of to see how much they knew about their own fair trade products.

I also wrote to the Fairtrade Foundation, so see what they could tell me (see below).

The Fairtrade Foundation are making every effort in a difficult climate, to truly make a difference in people’s lives. Further to the response they gave me, it is also worth reading recent articles by them such as this one: The real cost of cheap tea.

And as they point out, at the heart of the issue, is what we, the customer, are willing to pay.

Justice in trade requires sacrifice on our part, because if something is cheap to buy, someone has had to pay for it. It is unlikely to be the company selling the product to us, so if we don’t pay, the producer or workers do.  And in these times of austerity, justice is suffering – for example, as consumers we are buying less Cafe Direct tea and coffee, so Sainsbury’s are selling less. this is what Cafe Direct had to say about it on Twitter:

Hi all, thank you so much for your support of our tea campaign recently. Unfortunately Karen is right about supply & demand, and although we got almost 1000 responses, Sainsbury’s has decided not to reverse their decision on tea. As they point out, they are still working with us on expanding the range so we`ll keep you posted. However, if you are members of any FT groups then we’d love to link up to do something with our tea. If you send us your email addresses we can chat about it further? Emily (at Cafédirect)

Note, this is Cafe Direct – a company who deals directly with small producers who are also the workers – the highest quality of fair trade you can get (as compared to fair trade bought from larger producers who then employ lots of workers).

So it comes down to this. No, fair trade is not perfect, but there are a lot of dedicated people out there trying to better the lives of the people who supply us with our goods. I believe we have a responsibility to buy products with the best possible justice pedigree we can afford.  We also need to take a long hard look at how we define what we can afford.  While we may not be able to afford all our clothes to be fair trade (second hand is a good plan B),  we won’t starve without tea coffee and chocolate, so surely if our budget genuinely is that tight (and it is for many) we could just buy less, but buy fair trade.

Finally, a smattering of companies who gave me jolly good replies:

Five Things I’ve Learnt From the If Campaign.

I watched a program on iplayer the other day about the 14th century, called Christina: A Medieval Life.

I never used to like history at school, but now I find it truly interesting, especially when it gives you an “oh” moment… which this program did. The program documented the life of one peasant woman, and in the process, an amazing bit of English history.

There were pretty much two types of people, the rich, who had all they needed and disposable income for life’s nice things, and then there were the poor, caught in economic slavery, working for the rich before they could go home and eke some sort of existence for themselves.

Do you see my “oh” moment? Nothing has changed. The only difference is we have outsourced our economic slaves to other countries.

Others producing cheap clothes, food and luxury items, unable to pay for education, medicine or other basic needs. Just like the 14th century peasants.

It took the black death killing 1.5 million people in England alone to shake society enough to give these people freedom. I wonder what it will take for us to change?

If you are interested in this topic, try some of these links:

We are having an Earth Hour event at our church on Saturday – its my idea, and lots of the young people are leading stuff which is fabulous!
We are having two halves, the light hour and then when we switch the lights off for earth hour itself, the dark hour… not that dark hopefully what with candles and wind up torches.

There will be a fair trade cafe and shop, a chance to make bags out of recycled clothes, coasters out of recycled Cd’s, bird feeders using old drinks cartons, a clothes swap, games, a video and talk, puppets of praise and star gazing.
Sadly the man at the council hasn’t replied to me so no bicycle smoothie maker.
So today I have been making lots of cake – fruit cake, cherry chocolate cake, lemon cakes and banana and fruit cakes – R has got a sample of each, so that’s his lunches sorted 🙂

I am reminded in all this how much environmental and justice issues matter to me. I’m hoping in taking part, it might inspire some of the young people to further action – hopefully more clothes exchanges, or “swishing” and a regular fair trade shop at church.